We’re here to answer your questions.

Have a quick question? Chat live. 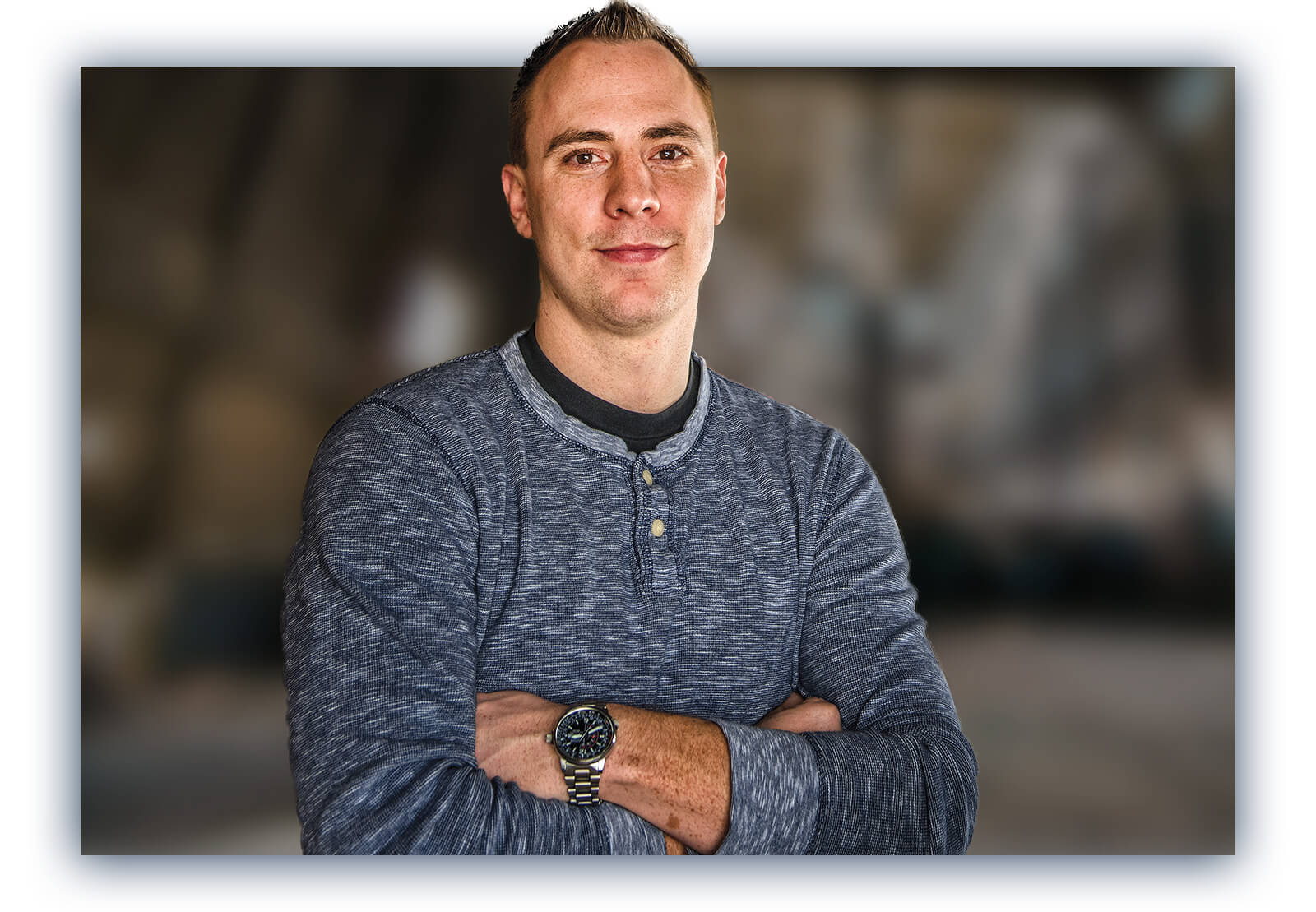 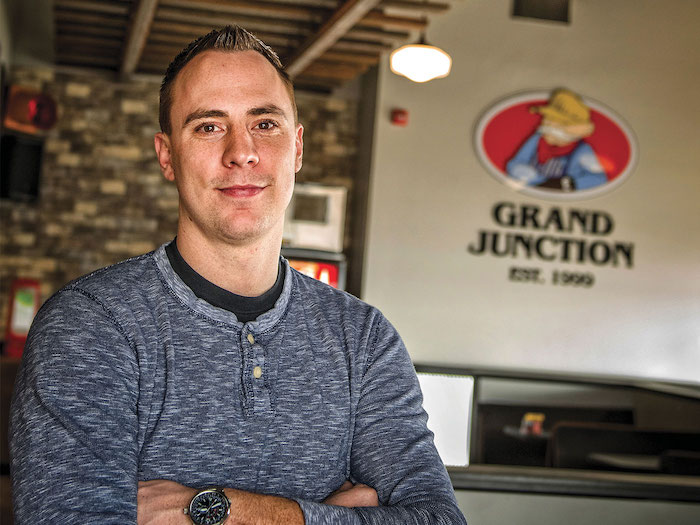 Colton, who earned his master’s in business from the University of Mary, has been a self-motivated innovator since he was in high school, buying and selling everything from high-end vehicles to electronics. Over the years, he’s advanced from operating a single restaurant franchise to owning it, then to opening another and another—and he’s still expanding.

How does he keep moving forward? He believes in thinking outside the box, being proactive, staying ahead of trends, understanding his customers, and engaging his staff in idea generation and creative marketing: “Relationship is everything,” he says.

Colton regularly returns to the University of Mary to speak to classes of hopeful business students and aspiring entrepreneurs, giving high marks to the university’s Gary Tharaldson School of Business.

In September 2019, Colton was awarded the Entrepreneur of the Year by the Bismarck Mandan Chamber EDC.

But despite his seemingly limitless energy, his goals are simple. “We don’t want to be big,” he says. “We want to be great.”

Guided by these Benedictine Values

Over 60 years of experience in faith-based adult education, including 25+ years of online and evening programs.

A University of Mary online or evening degree will strengthen the skills you need to achieve your professional goals and stand out as a servant leader for life. 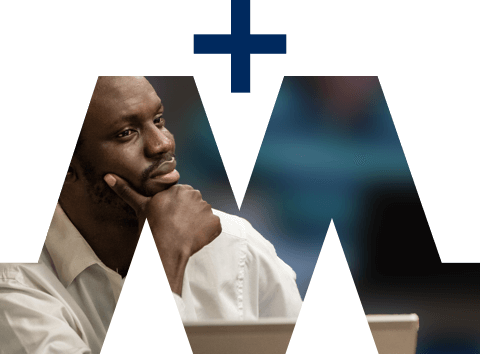 Our legacy.
Our tradition.

Attending the University of Mary instilled a life mission of servant leadership that shapes each day as an opportunity. I am gratefully blessed by the educational gifts I received as a student. 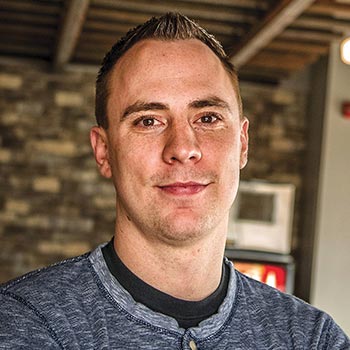 Colton, who earned his master’s in business from the University of Mary, has been a self-motivated innovator since he was in high school, buying and selling everything from high-end vehicles to electronics. Over the years, he’s advanced from operating a single restaurant franchise to owning it, then to opening another and another—and he’s still expanding.

How does he keep moving forward? He believes in thinking outside the box, being proactive, staying ahead of trends, understanding his customers, and engaging his staff in idea generation and creative marketing: “Relationship is everything,” he says.

Colton regularly returns to the University of Mary to speak to classes of hopeful business students and aspiring entrepreneurs, giving high marks to the university’s Gary Tharaldson School of Business.

In September 2019, Colton was awarded the Entrepreneur of the Year by the Bismarck Mandan Chamber EDC.

But despite his seemingly limitless energy, his goals are simple. “We don’t want to be big,” he says. “We want to be great.” 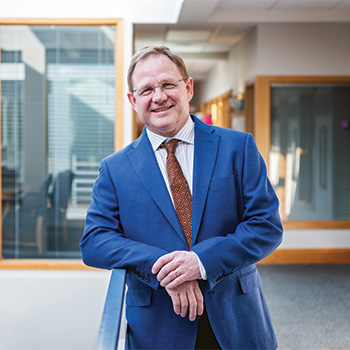 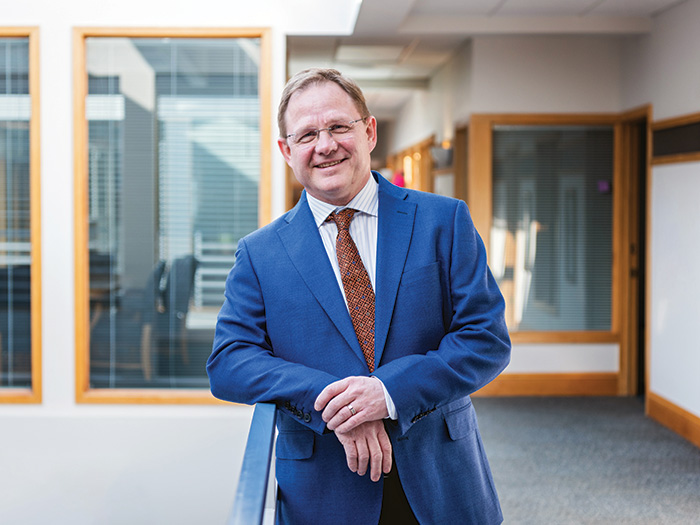 Kurt Snyder, ’91, ’06, had hit rock bottom. He had dropped out of college after just one year of failing every class. He had gone to college to wrestle— but his addiction had gotten the best of him. “My addiction really destroyed something I loved in my life … I loved wrestling, and I remember walking away from it feeling just tremendous regret.”

He was living in San Antonio, far away from his home state of North Dakota. That’s when his brother-in-law reached out to help him find recovery. It was through his brother-in-law’s encouragement that Kurt was able to start going to addiction counseling — counseling that eventually saved his life and helped him overcome his addiction. About a year after that, his brother-in-law died by suicide. “It was really devastating; he was like a brother to me,” Kurt said. “Here’s somebody that saved my life, and I really couldn’t do anything to help him at the time.”

Kurt decided he wanted to go back to college to become an addiction counselor, and at the age of 30, Kurt enrolled at Mary and joined the wrestling team. “My teammates called me ‘gramps,’” he joked.

He didn’t have the best wrestling season — he was hurt all the time, and he didn’t have a winning record — but he showed up every day, he didn’t quit, and he didn’t use drugs or alcohol. At the end of the season, coach Milo Trusty could take 12 people to the national tournament — ten to compete and two alternates. To Kurt’s surprise, Milo chose to bring him as an alternate. He went to nationals with the team, and another guy ended up getting hurt, so he got to wrestle. After losing his first match, Kurt wrestled some of the best he had in his life and ended up winning seven matches in a row to get third place. “I had one good day, and it was that day,” he said with a smile. “It was incredible.”

He didn’t wrestle the next year, but he helped coach the team as he completed his degree in addiction counseling.

“I felt like I was somebody who was thrown away at one time, but then I was given this community at the University of Mary that supported me in incredible ways. Mary gave me more than a chance to redo my college athletic career. I was successful; I was valued. I reclaimed my life,” Kurt said.

After graduating from Mary, he began his career as a licensed addiction counselor, most of it at Heartview Foundation in Bismarck. Eventually, the role of executive director opened, so he went back to Mary for his master’s in management.

Now he helps those struggling with addiction to find recovery like he did. Heartview Foundation is a nonprofit that provides treatment for drug and alcohol addiction. During his twenty years at Heartview, their staff has grown from eight people to 125, yet the need for addiction counseling has grown even faster. “Between April of 2020 and April of 2021, 100,000 Americans died from an opioid overdose. That is more people than the city of Bismarck. That’s a fully loaded jumbo jet crashing every day with no survivors. That’s how many people are battling addiction,” he said.

Kurt and his wife, Lisa, have two boys, Jack and Will. The boys don’t wrestle, but they both enjoy basketball.

“Mary has been there for me at every turn,” Kurt said. “I’m so grateful.” 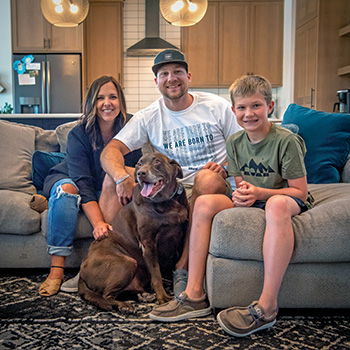 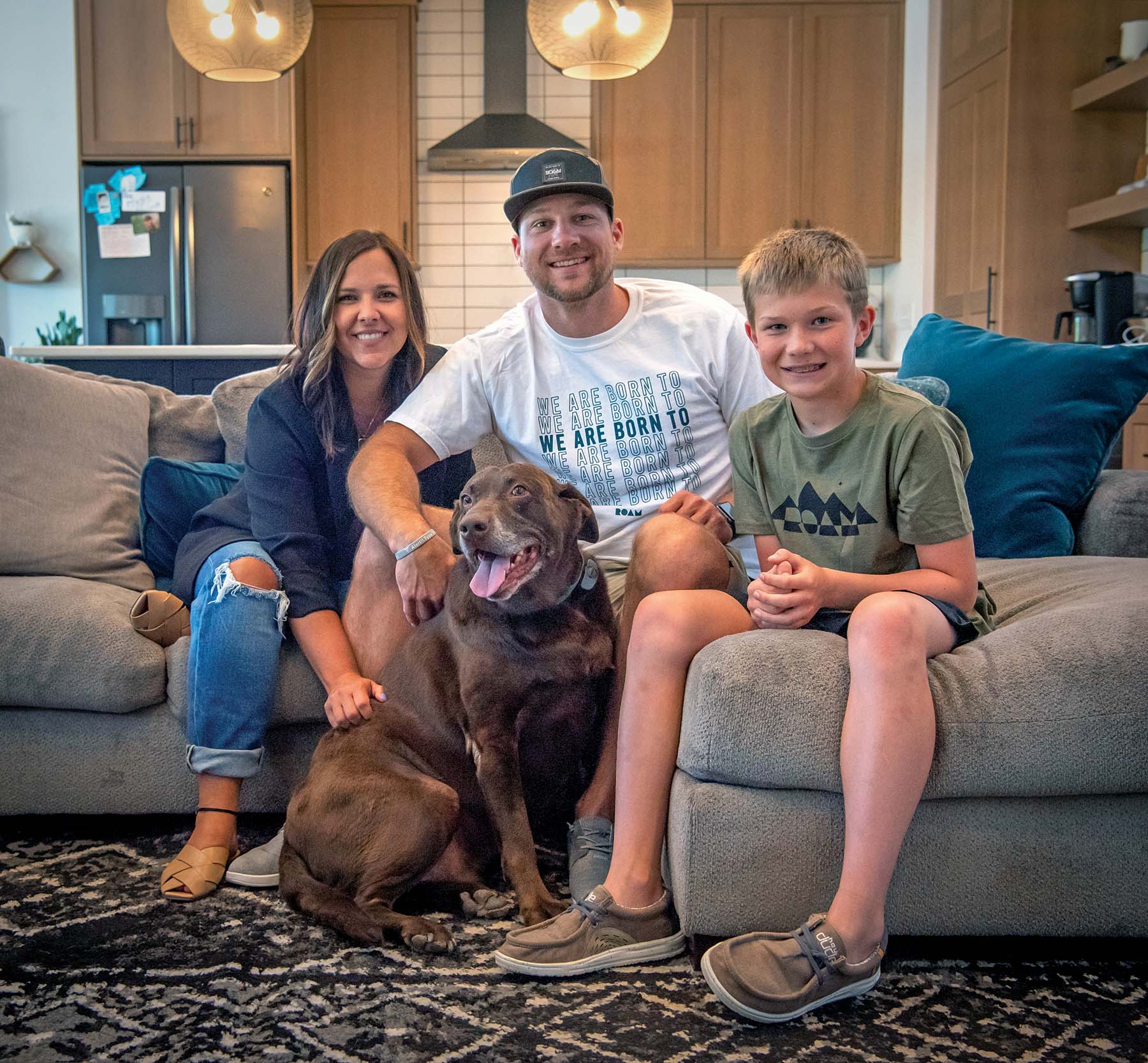 Callie Wachendorf
MBA, Class of 2012
Pursuing Your Passions – She went from fashion to health care IT professional and small business owner.

A woman of many titles, Callie Wachendorf, '12, seems to do it all. She currently works as a health care IT professional, but that wasn't what she originally had planned for herself.

"I actually went to my undergrad for fashion. So, my degree is in apparel and textiles retail merchandising," Wachendorf said.

She started at the Buckle, intending to work her way up to being a purchaser for the company. But when she had her son, Cooper, Wachendorf decided that working nights and weekends would not work for her anymore.

“I was thinking of the life I wanted to give my son, and I was not content with where we were. I wanted to show him how hard work can pay off, so I applied to the University of Mary for my MBA," she said.

"When I got accepted to grad school at Mary, it was a pivotal moment in my life. It changed who I was as a person and told me that I was good enough to go after my dreams, and I didn't have to settle for the status quo," Wachendorf continued. "When the days were long and the hours were short on a project, my professors were understanding, and they worked with me, and they encouraged me to get through it. The education I obtained opened my eyes to what I wanted to do."

After completing her Master of Business Administration in Management, she joined the hospital's IT department as a business analyst. Since then, Wachendorf has held various IT positions leading up to her current position as a health care IT consultant with Briljent.

Wachendorf still wanted a creative outlet, so she bought a machine to make her own shirts, and soon people started asking where they could buy them. She started ND T-Shirt Co in 2017 and makes soft t-shirts with fun and snarky sayings. In 2019, she began ROAM Wear 701 with a friend, a Midwest wander brand of clothing.

Now Wachendorf gets to do both, working as an IT consultant during the day and working on her apparel businesses at night. On top of that, she juggles being a mom and finds time to run a nonprofit, ND Giving Co., which puts on annual toy drives and sends birthday packages to families of fallen soldiers.

Wachendorf says that while it may seem like her day job and her other passions are very different, to her, it all comes down to finding creative solutions to a problem. Balancing it all keeps her busy, but she says she would not change a thing.

A flexible format to meet your needs

Wherever you live, the University of Mary can be your educational home. We offer many online degree programs and on-site evening/night classes in multiple cities, along with the support and care of a personal advisor. We make going back to school possible for working adults.

One of the most affordable private universities in the nation

We understand the value of your time and resources and we offer affordable options for you to reach your educational goals. Scholarships are available and we’ll work with you and your employer to facilitate reimbursement programs you may be eligible to receive.

Credit for your military experience

We believe strongly in service and are dedicated to helping active-duty, reserve, and retired members of the military and their families achieve their educational goals.

With a Military Student Services office led by a retired brigadier general and staffed by a veteran and military spouse, we understand the challenges of going back to school. From offering evening classes on military installations to granting credit for military experience, we’re here to serve those who serve our nation.

As a military student at the University of Mary, the affordability can’t be matched by any other institution in my area. Additionally, university staff and faculty are committed to supporting students with an affordable, worthwhile experience.

It’s never too late to earn your degree.

University of Mary is Here to Help. 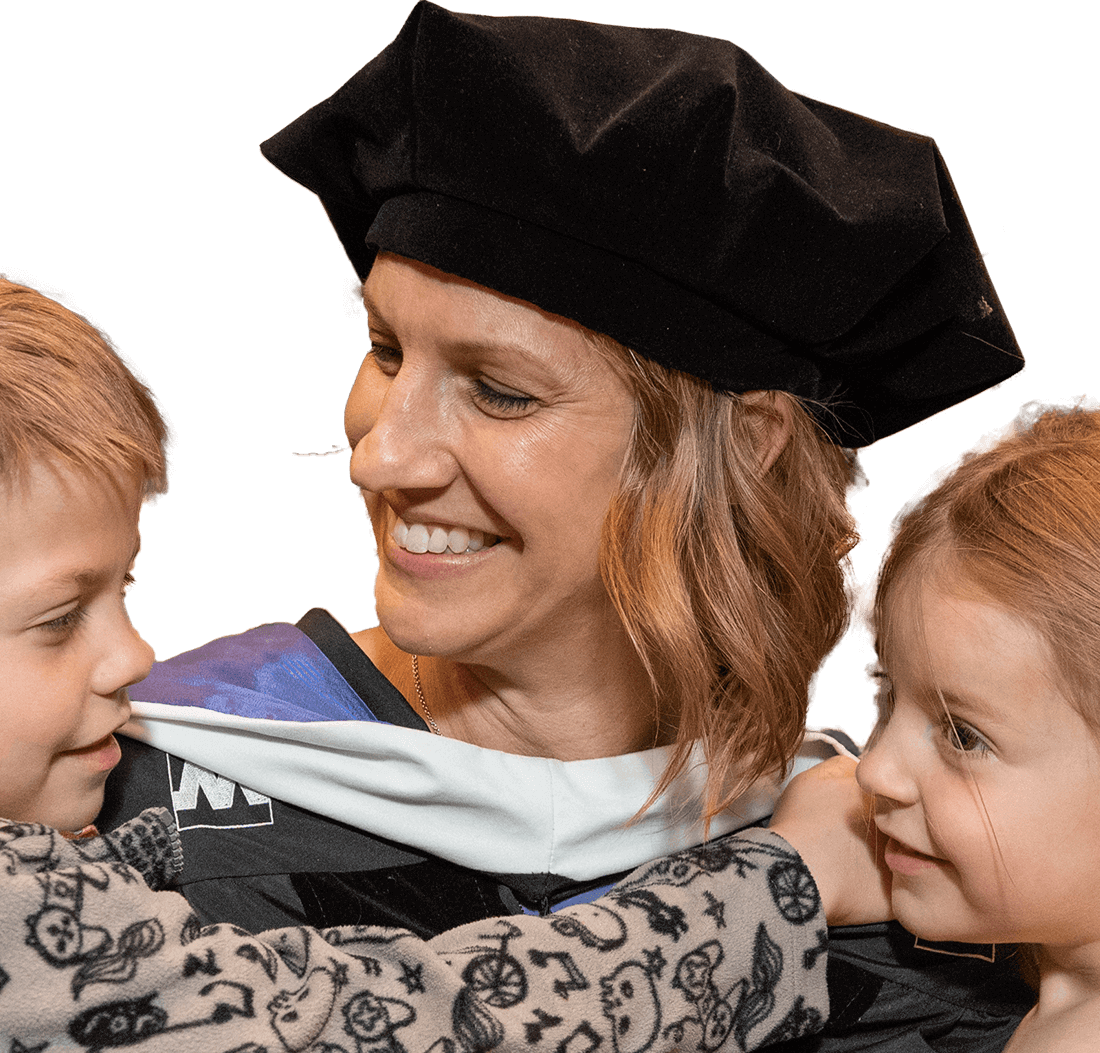